BBZ - Individual Path is a broad project initiated by Andrea Lorito and myself, the final objective was to create a permanent structure in a public area where to experience the space and individual trajectory set by the building/project.
There are some project plans and models of the structure here below, and a couple of drafted concepts.

We also created a site specific structure for NT Art gallery in Bologna, under a set of parameters and logistic obligations dictated by the exhibition's theme. The page is referring to this particular event and the piece "15" (unfortunately I lost the documentation pictures of the event except for one here).

My sounding "15" piece was also chosen as a single element in a collective exhibition in Mirano that had texts by mathematicians such as Michele Emmer and Piergorgio Odifreddi, again another themed exhibition: "art and logic".

Bbz- Möbius - “15”
This panel is the 15th of 14 (!) panels that form an open Möbius strip, within the "bbz-möbius" installation. The structure was created specifically for nt art gallery in Bologna, for their “ncvi l’8 - Nel Caso V’Interessi L’Infinito”.
“15” is situated along a journey that starts outside the gallery, and possibly resumes the various systemic relationships that build the entire installation:

A. From outside you look at the whole strip situated inside (with a webcam widescreen shot on the whole structure and a screen at the gallery window) in a room at -1 level;
B. Entering the first room (ground level) you can hear the sound coming from the room with the strip and you can start to see a part of it closer, from a geometric window cut in the wall (and already present in the gallery); the sound in this ambient, when you enter, is captured and processed immediately in the room with the strip;
C. We get to the passage (like a suspension from the first and last sound ambient) where “15” is situated,hanged in front of a sounding corridor (speakers are not hidden but not so visible). The panel diffuses a sinusoid simple wave, silence,and another sound which is a multiple of the frequency of the first;
D. At last you enter the room with the Möbius strip, that can be “walked within” up to a curve/arch. A part of the typical "eight" form of the strip is in front of us; the path that the panels form is covered with earth and salt. In the strip room you can hear the sound captured from the first room and processed.

The relations we encounter are at least those between the person, the ambient, the sound and the object. For each element we have tried to create, at least metaphorically, small systems built with self organized structures, as much as the installation in it's whole becomes a system of relations.
The 14 panels are joint together in a sequence that is inspired by the Möbius strip and it investigates the relation between internal and external space generated by the architecture. The parallel with the non movable geometries is not limited to the mere concave-convex structure: the panels are painted on both their faces with different results, yet with similar technique and same material, in order to develop in the space two "instantiations" of the same painting process. The two faces of the strip transform one into the other, creating the idea of perpetual motion, as in Escher's famous illustration “Mobius Strip II”, 1963. 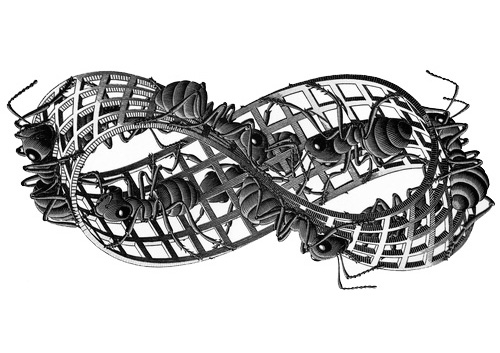 It is interesting and not so easy to find the flex point of this sequence, meaning the exact point where the inner becomes external, due to the paint texture threads in contrast and for the consistency of the spaces generated.
The form of each single piece is arbitrary; it builds up from it's dimensions, with a simple process of reduction in a sequence of triangles (used in geodetics as much as in topography): on one side the intersection of the two circles with same ray as of the other two dimensions of the triangle will find the missing angle (it will find two but we're only interested in one). The bi-dimensional composition of the pieces is based on a simple grammatical rule: each element is joint to the next by only one side of equal dimension; hence the sequence is formed by successive polygons, that create a theme with individual variations and joint by the unifying dimensions. Each piece starts with the last part of the previous and determines the start of the next one, in a theoretically never ending succession. Within the organization of the forms in space the panels find their static equilibrium when they encounter the floor. Being the panels joint with single connection points, infinite equilibrium positions are met with the movement of each single piece, yet only one configuration will guarantee stability if you consider the movements subsequently, meaning that once the equilibrium is found with the horizontal surface of two pieces, the successive piece will have only one possible final position that will lead it to achieve the equilibrium "by form".

The complete procedure, from the triangulation to the rotations when positioning, remembers the technique of origami, but belonging to a structure that self-constructs, claiming the territory given as an animal would do in it's own land.

A similar procedural approach was taken for the painting, the basic rule was based on the proportions of elements used for each side of the panels. As a recipe (or algorithm), we use x amount of an element E in relation Y with another for T times, in an ambient given A (in this case a percent of water and vinilic glue on wood).
The painting is there to exemplify the research for equilibrium between physical interacting elements (wood, water, glue, oxides and salt) nearly an experiment of the second and third law of thermodynamics (or in some moments similar to a synergetic system), and is indeed just one the possible set equilibrium of elements. The painting hence becomes also a metaphor of time within the panel and the Möbius strip.

In the process of creating our own Möbius strip have obviously taken the liberty to abbandon it's true form derivative from it's formula:

the sound processing algorithm has little to do with the "maths" of the strip, nevertheless the approach during composition had inherent procedures with tendency to infinite. We have an algorithm that processes the sound through the computer to the speakers, that is made of a sequence of delays in the reproduction of captured sound and subject to random variables (filters, delay time, repetition). The variables that dictate the quantity of sound in input and output and the quality of the repetition are numbers produced by the volume of the incoming sound, generated in the ambient. This creates a situation for which the more sound you make in room A the more sonic material is processed and elaborated in room B, but in room A the processed sound from room B is elaborated too: a cycle is then created, a small example of an 8 turned upside down.

The ensemble of these micro-systems inside the path from outside to inside, leads the visitor to be a significant part of a system, where he relates to the ambient created and that contemporarily he/she creates. Similarly the architectonic structure must find it's static equilibrium, the delayed and repeated sounds cross space, the salt crystallizes with the metal oxides.
Once at the end of the path, when returning back, you have contemporarily a partial and total vision of the installation, of detail and of all. A vision that is probably completed only in a second moment, in absence of the object.
These are some of the aspects of the "bbz" project, that , in this location, was realized in the form of a Möbius strip installation/path.

BBZ, wood prototype near to 1:1 scale 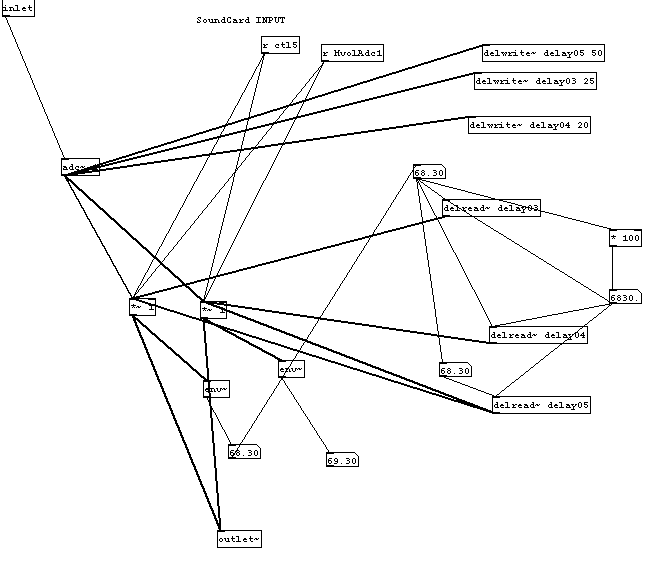