by Robert Cahen and Matias Guerra

For a random number of cuts from 14 archive videos

This short work, presented in a few international festivals by now, is based on Imaginary Landscape n.5 by John Cage (1952), and offers an interesting intersection between avant-garde and popular music (in this case between Cage’s score and the Mugam musical tradition, here re-created by the Azerbaijani musicologist and scholar Jahangir Selimkhanov). Moreover, this “dialogue” is articulated and represented in electronic images by the french video-artist Robert Cahen and myself. Our video-strategy actualizes the fragments, which in a new time and space create unexpected micro-narratives. We have chosen excerpts from our respective video archives to create a “video landscape” intertwining two different musical experiences, two different approaches and identities, two different histories and aesthetics.
The main elements in play become the key references within the images, like the small narratives that open up from second to second and the recognizable repetitions which not only give a rhythm but a semantic context too.
We were commissioned the piece and had the music given to us first, instead of focusing on the Azerbaijani IL5 version we decided to go back to the root, thus not analyzing specifically actual "mugam" distinctive marks like it's tempo or "mood" but studied the original score breaking down elements of main interest to follow the score not blindly but as a transposition for video, in the end the score was for sound and not image, where the principle and the baseline ideas from Cage's work are respected.

Regarding this work I have given a few lectures - ie. at IED, Milan, November 2017 and was invited for a seminar with Robert Cahen at Pisa University, April 2018 - which focus lightly on Cage but go in depth on the relation between sound and music in the current overblown image culture. 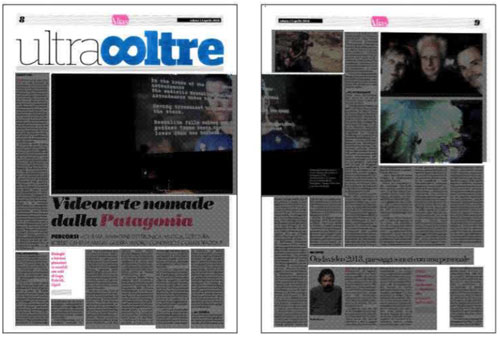 On 14 april 2018 in Alias - il manifesto the two central pages were dedicated to Cahen's and my work, article by Sandra Lischi.

Images: stills from the video
^